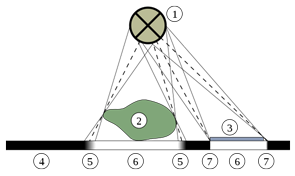 A scheme with the parameters influencing the appearance of
a shadowgraph. Image: Dr. Schorsch/ Wikimedia commons

All two-dimensional electromagnetic receptors function theoretically as photosensitive material. A source of light can be used as well as invisible rays such as microwaves, infrared light or x-rays.
Conceptually, the photogram as a kind of light imprint differs fundamentally from lens-based photography. By its immediacy, its quality as index caused by the potential contact and the reversion of distance relationships, the photogram relates more to imprint techniques and shadow phenomena.

Or to make it short: The shadowgraph is a highly differentiated shadow picture fixed directly on a light sensitive surface. Almost everybody gets in touch with a shadowgraph for the first time during a check-up with his doctor, since an x-ray is essentially a shadow picture.

Conceptually there is a controversy as to whether shadographs are merely an experimental camera-less branch of photography, or if it constitutes its own medium. The front lines in this debate became obvious at a symposium at the Centre for Art and Media (ZKM) in Karlsruhe, which for the first time was devoted explicitly to shadowgraphs respectively photograms (read more). Part of the scope of www.shadowgraph.org is to strengthen the medial independency of shadowgraphs, as they differ greatly from a photographic image made with a camera. Everybody knows the strange feeling watching for the first time his own body as a shadowgraph on an x-ray. The shadowgraph technique is at least as old as the existence of photosensitive surfaces. The real breakthrough for the photogram constitutes the discovery of x-rays by Conrad Röntgen. In the arts, the shadowpgraph was explored rather late, after the first World War.
In 1925 László Moholy-Nagy tried to establish the notion "photogram" for cameraless processes. Before the expression photogram was used analogously to a camera based photograph. With respect to Christian Schad and Man Ray who used the technique before Moholy-Nagy, sometimes the technique is also called "Schadograph" or "Rayograph".

The following techniques are often subsumed as shadowgraphs respectively photograms, but do not consort with a narrow definition of a shadograph.

The luminogram (lat. lumen - light) only works with light. Objects are not used. Light is modulated by filters, patterns or motion. Sometimes the photographical surface itself plays the role of an object beeing e.g. bent, torn or knittered, as in the early works by Kilian Breier.

This technique simply uses just the chemical substance of a photo paper to create pictures. The silvergelatine is mainly modified not by light but by different chemicals. The chemicals are e.g. dropped or put on by a brush. There often exists a combined technique: A yet exposed paper is just developed or fixed partially. A conventional b/w-paper than results in different tones.
But the emulsion also can be modified by a large range of metallic salts and couplers. Even "completed" chemigrams are very dynamic. The tones often change by the influence of light, temperature and humidity, especially when they are not fixed or chemicals remain on the surface.
But also colour papers react. Especially organical substances like enzymes can have a immens influence on the emulsion.
Sometimes the emulsion is physically modified by scratching into the gelatine or even by burning (brulage) parts of the paper.
A lot of chemigrams have a strong painted character.

A cliché verre is a contact or enlarged print of a 2-dimensional object. It uses for example painted transparent papers, stencils, scratched glass plates or hand-modified negatives. Because of its 2-dimensionality it differs a lot from the photogram.

how to make a shadowgraph

Making shadowgraphs at home is extremely simple. One can easily create his own shadowgraphs by placing an object on a photo-sensitive surface (like photo paper) inside a dark room. The paper is then briefly exposed to light and later developed. Watch a short crash course how to make a shadowgraph.

More: Listen to personal statements of artists as Adam Fuss or Joan Fontcuberta.

Thanks to Ted Green for the English translation!